Every academy session (whatever the syllabus topic) will begin with individual ball manipulation and “Rondo” based pass, touch and move drills.

We will focus the start of every session on improving and sharpening up the player’s individual ability with the ball, ability out of individual possession, receiving skills, body shape and ability to move the ball.

The syllabus we have designed is heavily focused on our tagline “A player should never panic or look uncomfortable with the ball at their feet, no matter what the situation”.

The players will also do many topics and drills within a match format. This helps us translate the coaching points to realistic and easily identifiable situations that take place during a match.

In every session and every topic of the season we will focus on (1) in possession (2) out of possession and (3) transitional factors.

Lots of our topics cross over and many of the same coaching points will be relevant in multiple syllabus topics.

For example, by block 7 (Match Play) we will be using the coaching points and terminology we have been using in the previous 6 blocks.

‘’You play at the rhythm you train. If you train badly, you play badly. If you work like a beast, you play the same way’’ – Pep Guardiola

We expect players to learn positional roles rather than formations. The reason for this is because players will find themselves in many different areas of the pitch during a game and it’s important they know what is expected of them in each position.

For example a player playing right full back will find themselves at right wing, right wing back, centre back and even the CDM position during a match. Each one of these positions has very different roles and the players need to know what they are when they find themselves in that section of the pitch.

The picture below shows the positions that we use and what positions the players will be expected to learn the roles of. 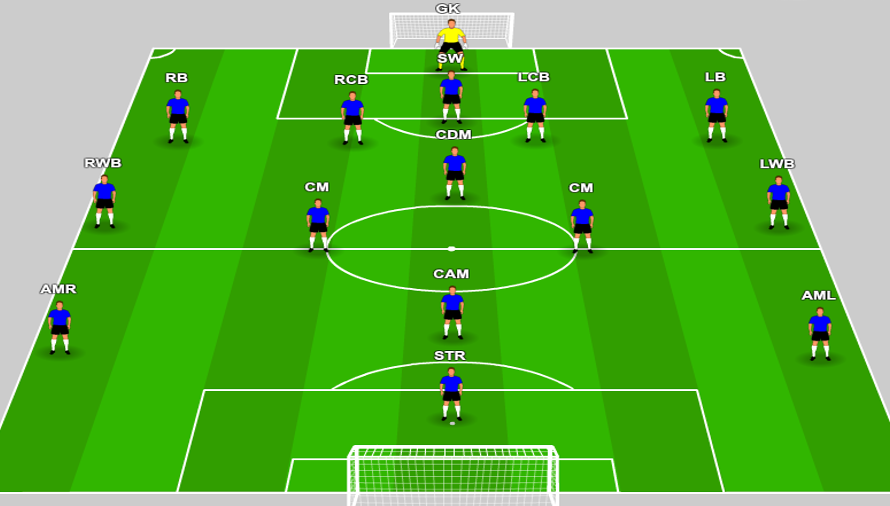 I have designed a playing structure that will allow the players to adapt easily when they move up the age groups and to different formats.

With the new and current guidelines players will change formats 4 times in their playing career (5, 7, 9 and 11 aside).

Our structure philosophy will make these formats easily adaptable with the basics of the positional roles and responsibilities being the same throughout the age groups.

We will have the same playing styles, ethos and philosophies from U6-U18. All FITC teams will play exactly the same way regardless of age or format.

Another benefit is when a player is called up to play for the year above, they will know the style of play and the roles and responsibilities expected of them. This will make it a lot easier to adjust to playing in a different age group.

We aim to develop technically excellent players with the skills and attributes to excel in professional football. The players will have the ability to create, score and prevent goals through excellence in:

We aim to develop FITC Academy players with a comprehensive knowledge, understanding and experience of high level football. The players will be equipped with the skills, abilities and decision-making capability to tactically manage football games. We aim to produce players who can:

We aim to develop FITC Academy players who possess outstanding physical and athletic skills in the following areas:

We aim to develop FITC Academy players who display outstanding social skills across the following areas:

We aim to develop FITC Academy players who display psychological skills across the following areas:

WHAT WE EXPECT OF ALL OUR OUTFIELD ACADEMY PLAYERS